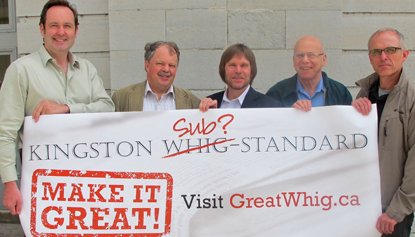 It’s a project the size and likes of which CWA Canada has never before undertaken. The mission? To enjoin an entire community in a campaign to pressure a corporate media giant to restore the quality of its daily newspaper.

An advertising blitz that heralds the launch today of the ambitious multi-media campaign is sure to make the Kingston Whig-Standard the talk of the town, which some time ago dubbed its once highly regarded publication the “Sub” Standard. The message to “Make It Great!” will emanate from billboards, transit ads, radio spots, flyers, the GreatWhig.ca website and a Facebook fan page.

Quebecor chief Pierre Karl Péladeau is about to get an earful from disgruntled readers and advertisers who have lamented the newspaper’s rapid decline under his stewardship. They will be sending email messages and signing a petition that calls on Quebecor to “devote the appropriate resources to the Whig-Standard so that Kingston can once again have a newspaper worthy of our great city.”

Martin O’Hanlon, deputy director of CWA Canada, initiated the project last fall and has overseen its development over the past six months. The executive of the Kingston Typographical Union (KTU), which represents Whig employees, heartily endorsed the plan and connected its architects with community leaders and activists who were quick to embrace the campaign.

“This is about fighting the good fight for quality local news and jobs. It’s not about union versus management; it’s about doing what’s best for everyone,” says O’Hanlon.

“We want to convince Quebecor that investing properly in its newspapers and keeping jobs in the community is good for readers, employees, democracy — and profits.”

Paul Schliesmann, a veteran reporter at the newspaper and vice-president of the KTU, says this is a last-ditch effort: “This project gives me the only hope I have left for the Whig-Standard.”

As the campaign material notes, the Whig-Standard used to be one of Canada’s best small-city newspapers. It won national awards for investigative reporting, offered in-depth coverage of Kingston issues and provided a balanced forum for discussion of matters of local and national importance.

In recent years, and particularly under Quebecor ownership, the qualities that once made the Whig-Standard a source of pride for Kingston have dramatically declined. Readers and advertisers keenly feel the loss.

Petitioners, whose message will go to both Péladeau and Ron Laurin, the newspaper’s publisher, will “request that Quebecor devote the appropriate resources to the Whig-Standard so that Kingston can once again have a newspaper worthy of our great city.”

Alec Ross, a long-time activist in Kingston who cares passionately about the Whig’s status, is co-ordinating the campaign for CWA Canada. A local company was contracted to design and construct the website, which features video testimonials from people in the community who describe the impact of Quebecor’s corporate decisions.

Among those weighing in are Rob Baker of the Tragically Hip, Richard Kizell, chair of the University Hospitals Kingston Foundation, professors, business people, politicians, writers and former Whig reporters.

“Generally,” says Ross, “I chose the video subjects because they are thoughtful, engaged and articulate Whig readers. We have a lot of support from prominent Kingstonians who totally sympathize with the cause, but who — for various reasons — declined to do a video.”

Lawrence Scanlan, who used to work at the Whig, recounts the halcyon days and expresses his sadness for what has been lost. He’s one of many dedicated journalists who recognize that a once proud profession has been undermined by a corporate ownership more interested in proselytizing a political ideology than upholding the public’s interest, a newspaper’s traditional role.

Indeed, Quebecor’s Sun Media has spread its right-wing tentacles into its newspapers and broadcast outlets to espouse its agenda and silence voices of opposition. The chain’s newspapers are filled with articles that spread the gospel and barely reflect the communities they purport to cover.

Centralizing of functions such as subscription services and advertising has eliminated scores of jobs at Sun Media publications and disconnected the publications from the communities they are supposed to serve.