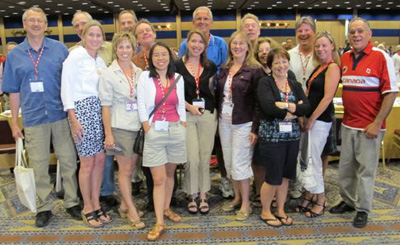 Today’s tough economy and political attacks demand a “broader, deeper” movement, organizing not just new union members but building alliances that will make it clear where America’s true majority stands, CWA President Larry Cohen said Monday in his convention address. “We need to be in the streets as well as at the ballot box,” Cohen told the 1,600-plus delegates, retirees, family and friends at the 73rd CWA convention. “We need the energy and intensity of Madison, Wisconsin, or Cairo, Egypt. We need to unite with non-labour groups who share our vision of restoring the American Dream for working families.” As history proves, collective bargaining rights are essential to that dream, Cohen said. In both the United States and Canada, as bargaining coverage grew from the 1930s to the 1960s, “we negotiated real improvements in living standards — better health care, better pensions, higher wages and expanding organizing rights, and we expected that our children and grandchildren would have a better life,” he said. But as bargaining rights declined, everything changed. Despite still-growing worker productivity, workers’ wages have stagnated while “CEOs keep getting richer because they are writing the rules,” Cohen said. “Bargaining rights are critical to any functioning democracy,” he said. “And they are critical for a functioning economy.” Drawing rousing cheers from delegates, Cohen unveiled a short new video showing CWA in action with its partners in recent battles. “This is movement building. This is what democracy looks like,” Cohen said.