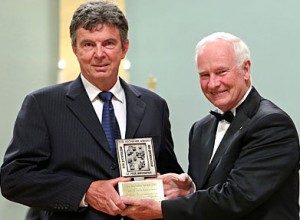 Les Leyne accepts the Michener Award on behalf of the Victoria Times Colonist from Governor-General David Johnston at the ceremony in Ottawa.

CWA Canada extends congratulations to its members who are among the winners in this season of media awards.

Claiming the country’s top honours for public service journalism is the Victoria Times Colonist, which secured the coveted Michener Award. Columnist Les Leyne, a member of the Victoria-Vancouver Island Newspaper Guild, accepted the award on behalf of the newspaper in a ceremony at Rideau Hall in Ottawa.

The newspaper received the Michener for reporting on the plight of people with developmental disabilities when the B.C. government changed its policy to save money and to address a client backlog. Reporting by the Times Colonist forced the government to admit that it had been ushering people out of group homes, something it had long denied. The result was a change in policies and the commitment of $40 million to improve services.

The Michener judges awarded a Citation of Merit to CBC Vancouver for exposing systemic sexual harassment of women within the RCMP. Two reporters, Manjula Dufresne and Natalie Clancy, who are members of the Canadian Media Guild (CMG), were among the news team sharing the honour.

The Canadian Journalism Foundation this year named CBC Radio One’s The Current as the winner of its prestigious Excellence in Journalism Award. It celebrates news organizations that embrace the ideals of journalistic excellence in accuracy, independence, accountability, courage and originality.

In her acceptance speech at the awards gala in Toronto, program host and CMG member Anna Maria Tremonti urged her media colleagues to “take your journalism back.” She said they should take The Current‘s win as “an affirmation for all of us that hard-edged journalism — edgy, provocative journalistic efforts — will never be a liability in this country.”

Canada’s public broadcaster fared exceptionally well at the New York Festivals International Radio Awards on Tuesday, claiming 13 trophies. Almost all of the people who help produce the award-winning programs are members of the Canadian Media Guild, including such prominent hosts as Jian Ghomeshi, Michael Enright, Shelagh Rogers and Steve Patterson.