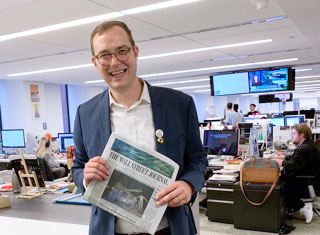 Schleuss, whose four-year term begins immediately, ran on a platform to reform and modernize the 87-year-old union.

“We now have a stirring of wind at our backs, and we must build on our accomplishments,” he said in a news release. “It won’t always be easy, but our mission is to continue to grow the Guild and fight to preserve the future of journalism.”

Lunzer led the Guild through its greatest period of growth in decades, organizing 60 workplaces and 3,000 workers in the last four years.

The international referendum, in which all CWA Canada members were eligible to vote, was an unprecedented re-run of the spring contest. The union’s election committee determined that over 1,000 members had been effectively disenfranchised when mail-in ballots were sent to out-of-date addresses, mostly at the Canadian Media Guild (CWA Canada Local 30213). Locals are responsible for maintaining up-to-date member addresses.

The independent American Arbitration Association, which was contracted to conduct the election, reported that almost 3,600 ballots had been received by the Dec. 9 deadline. Each Local could choose whether to conduct in-person voting between Nov. 12 and 17 or arrange for members to receive mail-in ballots.

With more than 20,000 members, including 6,000 at CWA Canada Locals, TNG is the largest journalists union in North America. It is a sector of the Communications Workers of America (CWA) and is affiliated with, but has no involvement in governance of the autonomous Canadian union.

The two candidates were nominated at TNG’s 80th Sector Conference held in Florida at the end of January. Attending as a guest, Schleuss became a TNG member in good standing immediately prior to the start of the conference.

Schleuss, 32, was a key player in the successful 2017 campaign to organize editorial employees at the famously anti-union Los Angeles Times, where he has worked since 2013.

The 62-year-old Lunzer — who worked at the St. Paul Pioneer Press for 10 years, then as administrative officer of the Minnesota Guild from 1989 to 1995, when he became TNG’s secretary-treasurer — has been president since 2008.