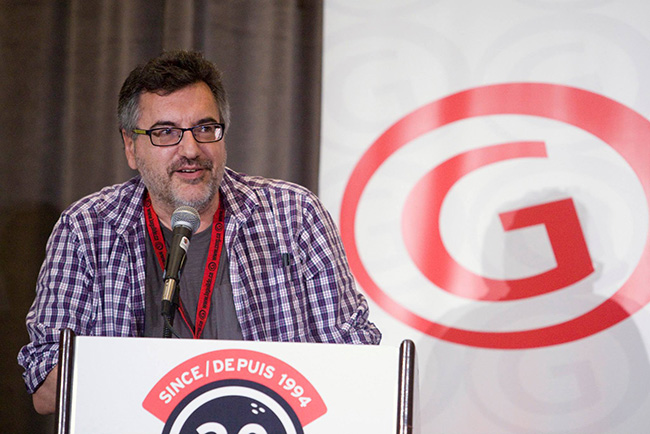 Don Genova has become the ‘go-to guy’ for frustrated freelancers.

There aren’t many unions that would spend time and money to take up the cause of non-members who haven’t been paid for their work. But that’s exactly what the Canadian Media Guild / CWA Canada is doing.

Don Genova, president of the CMG Freelance branch for more than 15 years, is the champion of more than a dozen independent contractors who are owed $40,000 by an Alberta multi-media publisher that has a track record of tardiness when it comes to paying up.

As a result of the efforts by CMG, Genova has become the “go-to guy” for freelancers who face a host of problems ranging from low rates or non-payment to publishers that expect writers to accept contracts that “ask for the moon and the stars.”

When a member contacted Genova early last fall to enlist his help in her quest to wrest payment from Edmonton-based Venture Publishing, he wasn’t surprised. There had been complaints for several years that the company was lax about paying freelancers.

In August last year, CanadaLandShow.com carried an article by Jay Smith, who found two freelance writers who were willing to go on record about the difficulties they encountered trying to get payment from Venture.

Genova suspected there were many more out there. He put word out through The Story Board, a website for freelancers that was an initiative of CMG and the Canadian Writers Group.

A freelancer himself, he knew that, as individuals, many are afraid to speak up because it might jeopardize their career. He also knew that the union had to do what was right for these unpaid workers, members or not.

“The point of the exercise is to get them their money, to show them (freelancers) what we can do and that they can have a voice.”

He said the CMG will pursue the case even if the freelancers don’t join the union (although one of them has signed up).

“We’ve already spent quite a bit of money on this and their dues ($150 a year) would not cover our costs.”

Genova started out by discussing the situation with an official at Venture Publishing who admitted the company was slow in paying freelancers. Shortly afterward, the CMG Freelance member got paid as did one other independent writer.

“But there were still 11 people in the group who had not been paid,” said Genova. “And then, out of the woodwork came an illustrator who was owed $8,500.”

He worked with CWA Canada’s legal counsel to craft a demand letter that was sent to the company in November. It is not threatening and suggests possible solutions such as payment plans.

The letter did not produce results, so the CMG issued a news release on Feb. 22 to kick off a name-and-shame campaign that attracted some media coverage. (It also prompted more unpaid freelancers to contact Genova, bringing the total number up to 15.)

At the same time, letters were sent to a handful of companies that contract Venture to produce magazines or other media for them. They are being asked to take their business elsewhere until Venture begins paying freelancers in a timely manner.

The explosion of digital media companies and disruptions in the news industry have led to tremendous growth in the number of freelancers worldwide. What also increased were complaints about exploitative publishers, media companies that try to force bad contracts on freelancers and others that expect them to work for little or no pay.

Media unions such as CWA Canada, which at one time saw freelancers as a threat to their members who were full-time employees with benefits, have done an about-face and now strive to support them.

Genova noted that freelancers who join CMG get a lot in return for their money. They can rely upon experienced staff for advice on contracts and negotiation strategies. Among other things, membership gives them access to lower cost health and insurance benefits, free online training, special webinars and inclusion in a directory available to clients.

CMG Freelance represents hundreds of people who are contracted under the freelance article of the collective agreement with the CBC, as well as about 100 independent writers and artists.

In 2011, CWA Canada created its free Associate Member program that offers student, volunteer and precarious media workers training, workshops, mentoring, networking events and paid freelancing or internship opportunities. Many of the more than 850 associate members move on to join CMG Freelance as they get established in their career.