Two vying for presidency of NewsGuild-CWA in spring election

An activist with a new Local has emerged as challenger for leadership of The NewsGuild (TNG) that will be decided in a spring election in which all members of CWA Canada are eligible to vote.

Jon Schleuss, 31, is running against President Bernie Lunzer, 61, who has held the position since 2008.

TNG, a sector of the Communications Workers of America (CWA), is affiliated with, but has no involvement in governance of the autonomous Canadian union. (However, CWA Canada President Martin O’Hanlon is a voting member of the TNG executive board.)

Each CWA Canada Local will determine whether ballots are cast in person on location or by mail during the April 10-15 election period.

The two candidates were nominatedat TNG’s 80th Sector Conference held in Florida at the end of January. Attending as a guest, Schleuss became a TNG member in good standing immediately prior to the start of the conference. 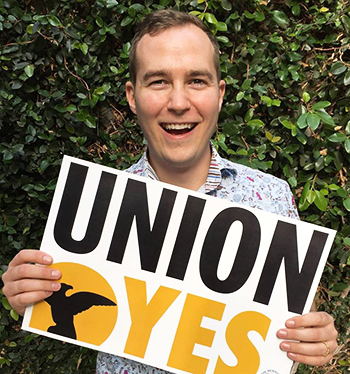 Schleuss was a key player in the successful 2017 campaign to organize editorial employees at the famously anti-union Los Angeles Times, where he has worked as a data and graphics reporter since 2013.

Lunzer — who worked at the St. Paul Pioneer Press for 10 years, then as administrative officer of the Minnesota Guild from 1989 to 1995, when he became TNG’s secretary-treasurer — is counting on that lengthy experience in his bid for re-election.

On his campaign website (BuildingTheGuild.org), Lunzer says that he and his team have “propelled the Guild to the highest level of organizing in years and have bargained strong contracts for new members.”

In a speech at the sector conference, Lunzer said he would continue to fight within CWA for resources to double organizing efforts, which have resulted in adding more than 2,700 members in 51 workplaces since 2015.

Speaking at the same conference, Schleuss acknowledged that “I clearly have a lot to learn, but I think that’s healthy. When we started the movement in Los Angeles two years ago, we had a lot to learn.”

According to his campaign website (JonForPresident.com), Schleuss is running for TNG’s top office “because we need a modern, energized and more democratic union that will protect our members, strengthen our contracts and grow our numbers — even as we meet the challenges of the rapidly changing media landscape.”

Schleuss, who became online editor at the Northwest Arkansas Democrat-Gazette in 2009, later worked part-time as a reporter and weekend host at an NPR station. In addition to his current work at the Times, he serves as an adjunct professor of journalism at the University of Southern California.

CWA Canada members who want more information or have questions about the election process should speak with their Local’s executive.